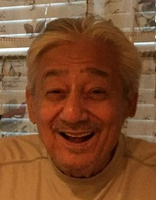 Robert was born on November 3, 1941, in Philadelphia, PA, to Albert and Louise Andalis. A proud Military Veteran. He was happily retired andlived the last few years in Westampton, NJ. Where he got to know the entire neighborhood.

Robert was a force of nature, determined to provide for his family and give them the life he felt they deserved. His family meant more to him than anything else in the world, something he often mentioned.

There will be a viewing/celebration of life for family and friends ,Tuesday, February 15, 2022, 10am-11am at the Goes – Scolieri Funeral Home,212 Levitt Parkway, Willingboro,NJ. (609)871-1000. Interment will be private and at the convenience of his family.