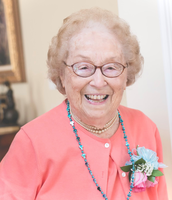 Emily was employed at Sears in Willingboro, and later at the Burlington Center for 50 years, at both the Men's and Children's Departments, working until the age of 92.

Emily hosted dinner for her entire family every Sunday, as well as every holiday. Emily was an excellent cook and baker, making the world's best pie crust. She, in her younger years, was an avid bowler, winning many trophies in her bowling league. Emily was also an exceptional seamstress, creating many outfits for her family, along with knitting and crocheting afghans, scarves, and hats for anyone who wanted one. Emily's most favorite pastime was the casino, always searching for the Flaming 777 and the Dick Tracy machines. Win or lose, it did not matter.

Internment at The Green-Wood Cemetery, Brooklyn, NY. Family and friends will celebrate Emily's life at a later date.